At first glance I probably seem like any good-looking guy in their late twenties. I have an obscene amount of confidence, a tattooed body sculpted by the Nordic gods, and I love the ladies as much as they love me.

Now the only way the monarchy can save face is for me to smarten up – publicly. If I don’t, I’ll no longer be heir apparent to the throne. So it’s either I abdicate my future role as King or…
I get married.
To a blue-blooded stranger.

Enter Princess Isabella of the tiny country of Liechtenstein.

Quiet, intelligent, and uniquely beautiful, Ella doesn’t like this arrangement any more than I do and she’s not afraid to show it. She says I’m a womanizer, that I don’t take anything seriously, that my ego should be taken down a few pegs, and I think she aims to make me miserable for the rest of my life.

But even as our arranged marriage becomes a war of wit and words, I’m determined to break through Ella’s prim and proper façade to find the wild​, sexual​ and risk-taking woman underneath. I want to uncover the Queen inside her.

The only question is – will she let me?
The Wild Heir is a standalone full-length royal romance.

Meet Karina:
Karina Halle is a former travel writer and music journalist and The New York Times, Wall Street Journal and USA Today Bestselling author of The Pact, Love, in English, The Artists Trilogy, Dirty Angels and over 20 other wild and romantic reads. She lives on an island off the coast of British Columbia with her husband and her rescue pup, where she drinks a lot of wine, hikes a lot of trails and devours a lot of books.

Halle is represented by the Root Literary and is both self-published and published by Simon & Schuster and Hachette in North America and in the UK.

The Swedish Prince follows Maggie Mayhem McPherson and Viktor Nordin from House of Nordin, aka Crown Prince of Sweden through a journey of lies, love, deception, tragedy, drama, anguish and heartwarmingly tender scenes between two families trying to learn to live again.

After an anguishing tragedy, Viktor finds himself in America for some down-time to find himself again. Here, he isn’t the Crown Prince of Sweden, he’s Johan Andersson (aka Mr. Körkort Sverige, funny story in and of itself with this name). Viktor finds himself on a cross-country road trip in his vintage car. Unfortunately (or fortunately), his car breaks down in Tehachapi, CA.

Maggie has also had a horrible tragedy thrust upon her and her family. One minute, she’s living the life of a carefree college student at NYU, next she gets a call that will change her life forever. One year later, she is now back home in Tehachapi and finds herself working as a maid to make ends meet, as she is the guardian to her five siblings. At twenty-three, this is a huge responsibility she faces.

“Callum is only seven. I’m his guardian for another eleven years. Tehachapi is my prison until then.”

She is cleaning rooms one day, when through a series of mishaps, she walks in on a blond Viking demigod. Oh yeah, Mr. Viking is naked and all Maggie can do is stare at the family jewels. Needless to say, Maggie is dumbstruck and hightails it out of there as soon as she can with as much dignity left in her body as she can muster. Through a calamity of errors/fate, Maggie comes face to face with Johan at the local bar where she turns into his knight in shining armor/guardian.

The Swedish Prince is a dreamy and sweet (with some heat) romance, that’s light-hearted despite having moments of emotional anguish. I adored the two main characters that Karina wrote about. Despite being about a girl finding her Prince Charming, it still had grounding emotional issues that made it real.

Viktor is sweet, lovable, dreamy, a romantic who is going through a tough patch. Maggie was an unbelievable heroine. She displayed strength in character, despite not enjoying her job she was a hard worker, had an incredibly big heart and sheer bravery to do what she needed to do as a guardian. The secondary characters were scene stealing, especially Callum. That little devil😈…BORK, BORK!! If you end up reading this book, pay close attention to location 69. Maggie is having a conversation with Sam, her best friend she met in NYC. They are talking about being ‘rick-rolled’. Absolutely hilarious!

Overall, I will gladly recommend this book to others. It may be a fantasy romance read, but in between the lines of fantasy there was so much reality, all you had to do was look. On the surface, you see two people from two entirely different backgrounds, yet if you peel back the layers of each character, there is a mutual incidence that brings them together. Viktor as the prince had everything he ever wanted except he was lonely and needed love. On the flip side, Maggie displays that all you need is love. Despite financially having nothing, she had the love of her siblings. If you’re looking for a good, sweet romance, pick up The Swedish Prince. ❤ 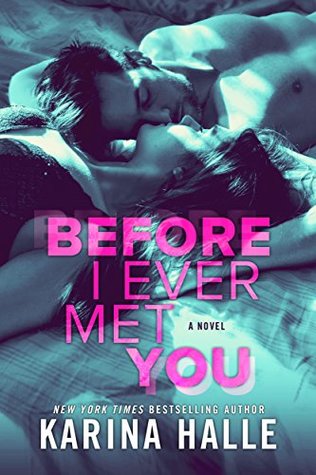 This story is about William and Jackie. Jackie first met Will when she was a teenager when Will happened to be her dad’s partner at work. Will was married at that time, but she had a slight crush on him. Fast forward ten years, Will is 41 and Jackie is 25. She’s living with her parents and her seven-year-old son, Ty. Through her dad she gets a job at his company working as an executive assistant to Will.

“Will’s smile should be made illegal. Or at least taken with caution. Warning: may make you weak at the knees. Do not look at smile if operating heavy machinery.”

I just have to say this, I LOVE Karina Halle. She writes her characters with such depth and personality that you can truly visualize what they may look or be like.  This story was no different.  I found it refreshing that Will truly was the All-American male hero in this book. Does he have issues or baggage? Yes, who doesn’t, but the way he cares for Jackie and Ty is truly wonderful.

“I’m now realizing how incredible you are. Jackie, you are an amazing human being. I’m even more enamored with you than I was before, and that’s saying a lot.”

Despite being twenty-five years old, Jackie has a truly old soul. She has been through so much ‘life experience’ in the seven years since her son was born, she is not your normal millennial. With her experiences, it causes Jackie to be the one who is hesitant to have a relationship.

The secondary characters were just as entertaining as the primary ones, specifically Tiffany and Alyssa. Both had these quirky, quick witted snappy comebacks that made them thoroughly enjoyable.

Tiffany: “It’s his fault for not wearing underwear.”

Jackie: “This is so wrong. Any other office and the two of you would be slapped with sexual harassment suits.”

Tiffany: “If he’s doing the slapping with his penis, I honestly don’t care.”

Will and Jackie together were extreme perfection. They have their ups and downs, as any couple would, but learn how to fight through them and for each other.

Since I can’t decide, I’ll leave you with two quotes from our beloved hero. Seriously, Karina wrote one sexy 41-year-old. This book is definitely worth 5.0 stars

“I’ll call you Dream Girl. Because that’s what you are to me”

“And when you find what lakes you heart beat, you soul sing, you have to hang on to it. That’s you Jackie. I’m done doing things halfway. It’s all or nothing now. And with you, I’m all in”.