Heart Thief is a gritty, dark re-telling of Moana. Here we have two sisters, Mona, and Clara. Due to their living situation, they are closer than close. Clara has yearned for freedom and gave Mona a matching trinket. She holds this close to her heart.

Soon, Mona is left alone. Living on an island full of people yet feeling like she is in solitary confinement. She lives with her father and mother, while her father is the ‘leader’ of this cult world. She was taught that all things from the outside world was evil and to only believe what her father had to say, yet, all she could think of was the outside world. Unfortunately for Mona, she was being ‘groomed’ into taking over as leader when her father stepped down. She longed for more than this.

My heart cried not only for Mona and Clara, but for certain individuals and scenarios on the island. I couldn’t help, but to root for Mona and her quest for more. Ker Dukey gave a FABULOUS re-telling of Moana yet made it a true Ker original with the twists and turns. Let me tell you the last one had me shocked and re-read until the end. WOW!! Despite being a loose re-telling, I was hooked and couldn’t put it down. 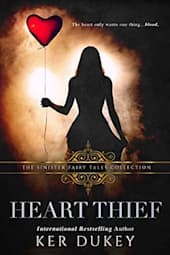