It is hard to imagine that this is Livy’s debut novel. She has been able to incorporate so many feelings and emotions from beginning to almost end. Yep, it ends on a cliffy. A cliffy that left me immediately shook and questioning and creating different conspiracy theories.

There are a lot of moving pieces throughout, including who is the good guy/bad guy, who can you trust, along with what is a nineteen-year-old supposed to do now? Luckily, Livy has written some strong-willed characters. This is a good thing as they will need to be able to handle all the mystery, intrigue, suspense, sexual chemistry, drama and angst.

All I have to say is, Livy, please take pity on your readers and do not leave us hanging forever! 😉❣

I finished reading four days ago and I’m still speechless. Every time I think about Saint and Willow, I replay everything in my brain and end up gob smacked and sighing. Monica James, what have you truly done to me?

It is such a bittersweet moment to have reached ‘The End’. Through the course of the trilogy, I had fallen in love with some of the characters and absolutely, despised others. In either case, though, the words printed evoked such an incredibly strong feeling, it was hard not to feel sucked into their world. Ms. James displayed such a strong character development throughout the series, it was beautiful to see on our main and some of our secondary characters.

In FMS, we see a role reversal between Willow and Saint. This time around, Saint needs a strong and protective savior.

Willow stepped up big time. She was such a bad@ss, digging deep and displaying such strength and determination to do whatever she needed to do. She was put into situations, that made her question herself, but with a newfound fortitude, she was able to work through it and still show compassion.

Saint. I love Saint. In books one and two, he was this larger than life beast who is fiercely protective of Willow. While doing this, he also showed us a ‘softer’ side. Now, as I mentioned, they had a role reversal of sorts. This time, Saint is the one who needs saving. Instead of this unbeatable beast, he is put into a situation that displays a less alpha side only through the use of drugs and other ‘means’.

Now that I’ve had time to digest this story, I’ve realized it has vague themes of, ‘The Gift of the Magi’, in it. If you are not familiar with this story, it talks about a couple who doesn’t have money for gifts, so they sell their most prized possession to pay for a gift to the other. In Forever My Saint, we’re not talking about jewels, riches or fortunes. Willow and Saint are each other’s most prized possession and because of this, they do what they can (or must) to save the other. In such a dark and emotionally horrendous book, it was beautiful to see.

‘When I think about losing Saint, my entire world crumbles, giving way to perpetual darkness.’

As I mentioned, writing this now is such a bittersweet moment. It means, we’re done. There is no more, but that’s ok. Don’t dwell on that. Think about all the incredible things that happen throughout the book. Monica will keep you on the edge of your seat with whatever may rise up next. Twists and turns are abundant and there is no way you can predict what the next move will be. Saint and Willow will always have a piece of my heart and I couldn’t be happier with the conclusion this couple achieved.

“Raven Carver, she does whatever the hell she wants, makes shitty judgment calls in a snap that you never see coming, and hopes it’ll all work out in the end, fuck the consequences. I can’t fucking stand it.”

Trouble at Brayshaw High, picks up where we left of in BOBH and, no, I will not tell you where it picks up or give you any spoilers. When BOBH ended, I had a lump in my throat and was sitting on pins and needles as to where this could go. I was never so excited than when I opened my library and 🎵AHHH🎵 Trouble had finally arrived. Now, here, I sit about five days later STILL trying to process everything I have read. If you read my emoticon review, it still all applies. I feel like I’ve gone on a roller coaster that is inverted, with eight consecutive loops, occasionally will go backwards all while swinging from side to side. Meagan Brandy, what have you done to me??

I fell hard for the leads in Boys at Brayshaw High. I truly didn’t think I could love Trouble more, but I do. Gosh, Maddock, Captain and Royce are more realistic with a bigger than life presence. I fell HARD for Maddock. He just appeared to be bigger, badder and with `a more encompassing persona/presence. Oh, man, I love that guy. I was happy to see that Captain and Royce had also come out of their shell more and displayed a bigger part of their personalities. Captain is the guy you just want to cuddle with or get a big bear hug from. Royce is that sentimental guy with a jokester attitude.

“Go on, play your games, baby. I’ve got more moves than you can handle.”

Ms. Raven Carver. Round of applause for showing who has the bigger balls in the Brayshaw world. She is a force to be reckon with. She has fought her scrappy way to get respect and devotion from those around her. Raven has learned early on that she needs to be resourceful, independent and cunning to get by in this game called life. What was beautiful to see was how Raven matured between the two books. Ok, I will admit, she still does Raven-like things, but she is somewhat more cautious with it. The character development of the foursome was spot-on and enjoyable to watch.

“Together, three strong, we head inside for our fourth man.”

Madman and Raven are being their usual selves, continuing to butt heads yet fight for their relationship. They are learning to trust each other and rely on each other. Maddock and Raven’s relationship is a joy to watch. They are completely each other’s matching puzzle piece. 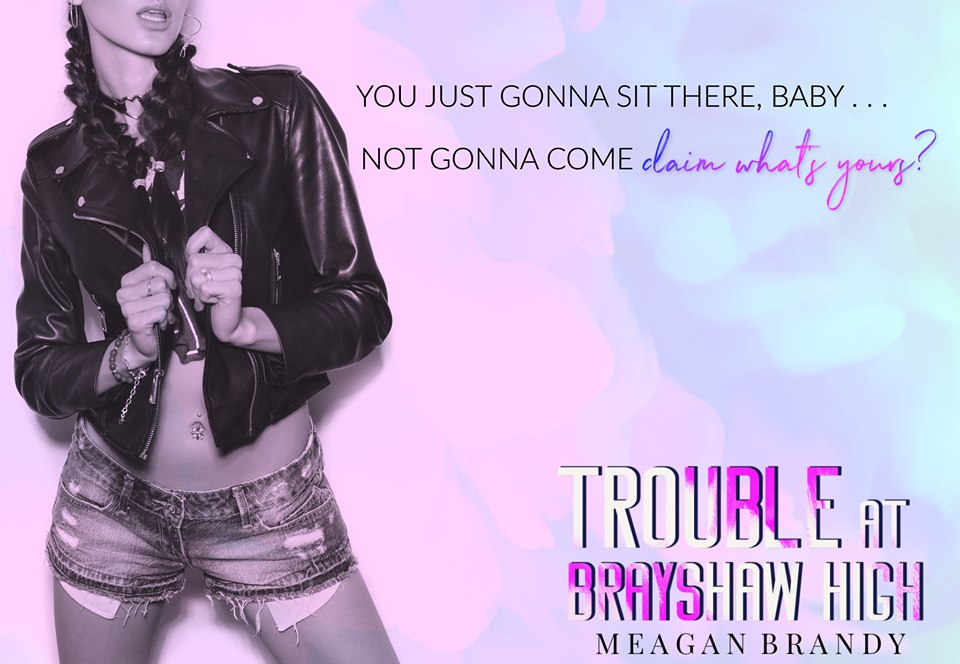 Re-iterating from BOBH is that Meagan Brandy is a flipping genius. There are good storytellers and then there are out of this world storytellers. Any idea which category Meagan falls into? Her storytelling capabilities pull you in and make you feel like you are a part of the story and these characters are more than characters, they are your friends. Now, how many of you are willing to go back to high school? I sure am, if it includes being in this little posse!! Whether you follow the ‘5 essential elements of a story’ or ‘The 7 key elements of a narrative’, Meagan Brandy has it all!! So, again, here I sit on pins and needles, anxiously awaiting book three!! 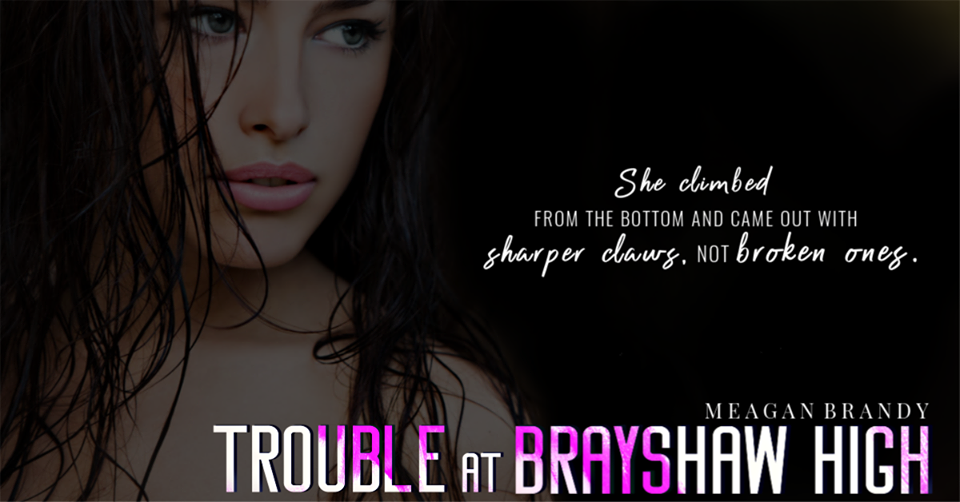 Before I say anything about the book, let’s take a look at the authors. Hello, it’s Ker and Kristi!! This is a power duo like never before. When these two amazing ladies put their heads together, you know it’s going to be golden.

Share Me is a reverse harem book, unlike any other. I normally have an aversion to reverse harem/harem books. Unfortunately, I’ve read too many that are focused on the dirty nasty, almost comedic storyline and not so much on quality. I can’t forget that they heroine is usually an innocent and pure virgin. I have absolutely nothing against dirty, nasty sex, hello this duo usually gives us plenty of that, but their story differs. Share Me is more than the nasty, there is a true storyline with emotions, feelings, intrigue and love. Oh my gosh, so much love, it was beautiful to see.

Clove is a politician’s daughter who has hopes of reaching 1600 Pennsylvania Ave. Unfortunately, while he has lofty aspirations and is busy trying to achieve them, he is neglecting his daughter more and more. At a vulnerable age, Clove’s mother passes away. To keep her safe while he’s not around, he hires her own bodyguards (who also sometimes protect him). An unforeseeable incident happens, and all go into uber protective bodyguards. Per her father’s request, she is whisked away to a safe house with her men. Things may never be the same.

Clove and the boys hunker down in a small one-bedroom hunting cabin. In this elevated, hyper vigilant, close packed alpha situation lines are crossed. Webster and Dukey increase the hot, dirty and filthy to a new level. Clove is a champ. She is a strong woman, despite her young age, and knows what she wants…her men. If you take the sex out of it for a minute, it was beautiful to watch this fivesome interact with each other like they’ve been doing it forever.

I would happily recommend this book to anyone. It is a solid and well thought out reverse harem storyline without the cheese/over the top factor. Get ready, y’all, you’ll want to keep your fan handy while reading this one!!