He walked into school on his first day and owned it.
I guess that’s what happens when you’re a prick, rich, and you’re best friends with the ruling school’s king.
Also didn’t hurt he’s drop dead gorgeous.

That’s all fine.
I mean, I have nothing to do with them.
I’m a loner, invisible, and that’s how I wanted it to be.

I was even proud of it, until I wasn’t.

Until I saw a girl kneel before him.
Until I couldn’t look away.
Until he caught me watching.

His name is Blaise Devroe. My name is Aspen Monson.
He only knew how to get, command, and demand attention. I knew how to do everything but that.
And this is our story.

“You get off on watching? Is that your thing, or is it just my cock you like?”
I was heading to my car after school when I heard him.
My heart stopped, almost literally. If I looked down, it was likely the entire contents of my stomach would be at my feet.
He’d found me.
I looked up, and Blaise DeVroe stepped out from behind the truck parked next to Maisie. His hand was on her back end, and he waited there, in the shadows (thank God), his head tilted to the side.
He looked so good, so delicious. All hard edges and angles. That jawline. It could give me razor burn between my legs, and I’d climax just by breathing hard.
I saw the flare in his gaze and felt his edge. I had to rein in a bit of my inner weirdo.
I’d heard about what happened that morning. Hell, I’d witnessed it myself, but then I’d also heard all the whispering about it afterward. It spread through the school like wildfire. And what they were saying hadn’t been kind. Most bets were that Blaise was going to be kicked out of school. Others said Zeke was going to have him beat up. Still others thought Zeke could have him arrested. How that even made sense, I had no clue.
But I also saw those guys interact through the rest of the day as if nothing had happened. Zeke still smiled at Blaise, even if he seemed more cautious. Some people said there was a rift forming in school. But again, why did that even matter? We had a week and four days left to be here. Then it was summer.
“You talk?” His head cocked forward. There was a slight bark to his words.
I jumped, then gathered myself. “Oh. Um…”
Shoot. I bit down on my lip. What did I say here? Okay. I had nothing, so I guess honesty was the best policy. Besides this guy playing a major role in my schoolgirl fantasies, I couldn’t deny that I was a little scared of him right now. I’d always felt there was something more in him, a wild edge, but no one ever said anything. There’d been no rumors about it, until today.
Today, everyone had seen. Today, everyone was talking about it.
“I, uh…” Screw it. I shrugged. “It was live porn. What did you expect?”

Sam and Mason return to Fallen Crest for a camping trip.

They head north, meeting up with a few friends from Roussou and enjoy a night of booze, some leapfrogging, and there’s a small therapy session to air out some tension in the group.

Enjoy a novella crossover between the Fallen Crest series and the Crew series!

Download your copy today or read for FREE in Kindle Unlimited!

Start the Fallen Crest Series and The Crew Series for FREE, for a limited time only:

Tijan is a New York Times Bestselling author that writes suspenseful and unpredictable novels. Her characters are strong, intense, and gut-wrenchingly real with a little bit of sass on the side. Tijan began writing later in life and once she started, she was hooked. She’s written multi-bestsellers including the Carter Reed Series, the Fallen Crest Series, and the Broken and Screwed Series among others. She is currently writing a new YA series along with so many more from north Minnesota where she lives with a man she couldn’t be without and an English Cocker she adores.

Let me start this my saying that I love Tijan. She has so many powerful and meaningful books, that when I see she has a new one coming out, I’m like, ‘yes please’. However, it pains me to say this, but I was a little disappointed in Crew Princess. It seemed to fall a little flat compared to the rest of the series, but I’m not exactly sure why.

Jordan, Zellman, Cross, and Bren are still tight as ever in their Wolf Crew and have matured and grown over the course of the book. Bren is in a quandary as she tries to figure out what she’s going to do after graduation, if she makes it that far. The rest of the crew already have plans, but she doesn’t know where this leaves her. Cross and her are as adorable as ever. Would you call Cross adorable? 😏😉

‘Your first loyalty is to the crew, but mine is to you.’

As mentioned previously, the Wolf Crow is tight. They are loyal to the fullest, will protect each other with their lives, and are their own family unit. I loved the ‘love’ these four had for each other and never once did they question where their loyalty laid or what they should do in any given scenario. These guys are going to need it with the war that is headed their way.

There is plenty of action throughout with multiple Crew’s involved. Roussou has had to take in students from other high schools, and since then the crews have been scrambling to regain and dominate their turf.

“We were the Wolf Crew, the smallest crew in the Roussou crew system, but also the most dangerous one.”

Let’s talk about Cross for a second. Cross (insert sigh) is still the alpha leader of the crew. Dare I say this, but his relationship with Bren is quite refreshing. There aren’t many ‘PDA’ moments in this book, but what they do share is very sweet. You can really feel the love between these two. Despite being in high school, he is a Hero that one could only hope for.

‘We caught the end of one girl telling her friend to just do it, “break the a@@ seal.” Cross shot me a grin over his shoulder. I shook my head. Not solid advice, on any day.’

I mean, come on. All it took was one glance over his shoulder and he had Bren had their own non-communicative conversation. That’s why I love their relationship.

I’m slightly confused on Bren. I love her, because she is a super strong heroine, but in CP we got to see a different side of her. With the realization that things are moving and changing, she becomes more emotional which is a contrast from her hard, dark persona. I feel like this was to humanize her a little bit to show her growth and change. I’m just used to seeing her a certain way and it felt unnatural. What I absolutely adored more than anything though was her interaction with Harrison. This completely felt natural and truly showed that she was changing and growing.

Despite all this, I am still a huge Tijan fan. Will I still read and buy her books? Heck yeah, because I’m curious to see what she has in store for us is Crew Love (Wolf Crew #3). 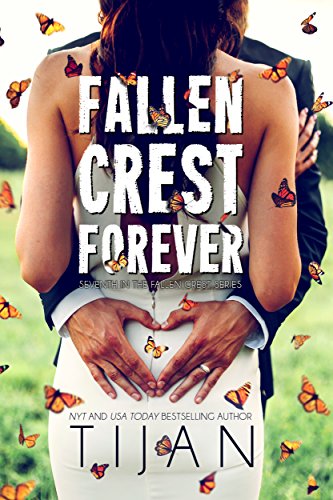 Oh, man, where do I start? I LOVED the whole Fallen Crest series. Tijan seems to have this magical ability to create a whole other world that sucks you in.

After seven books in the series, there is a lot of intensified pressure for a stellar final book. Well, there’s good news and bad news. Everybody HATES bad news so let’s start there. Firstly, Fallen Crest is done, over, kaput. Dang, where am I going to get my Tijan drama now. I hope she comes out with something quick! Secondly, speaking of drama, FCF seemed to have an excessive amount of it, that I’m not sure fit it (book/story-line) or needed to be there. There was Sam and Mason, Sam and some of her cross-country teammates, Sam and her mom as well as Mason’s mom. Needless to say, Sam had a ton of drama throughout this book.  I was saddened that I wasn’t feeling the true Sam/Mason emotional connection as part of the ‘threesome fearsome’. Lastly, I wanted more wedding and more closure with Logan/Tate and Nate.

So, here’s the good news. It’s still Tijan, her writing is phenomenal and I devoured the book all at once. I suffered the biggest book hangover once I was done and it seemed to take me forever to come to some sort of peace, that this second family of mine is done. Tijan is just one of those ‘one click’ authors for me and I love her writing.  Despite wanting more out of this book, I will still give it 5.0 stars, because it was that good.  Who knows, maybe we’ll get a quick novella somewhere down the line as an extended epilogue. What do you think?